What Were the Salem Witch Trials? by Joan Holub #Halloween #PenguinHouseBooks 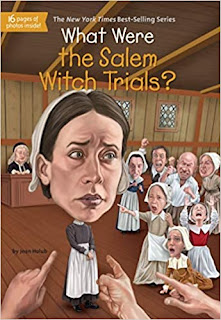 Something wicked was brewing in the small town of Salem, Massachusetts in 1692. It started when two girls, Betty Parris and Abigail Williams, began having hysterical fits. Soon after, other local girls claimed they were being pricked with pins. With no scientific explanation available, the residents of Salem came to one conclusion: it was witchcraft! Over the next year and a half, nineteen people were convicted of witchcraft and hanged while more languished in prison as hysteria swept the colony.

I have read a few of the "What were... or Who Is..." series of books. They are always concise and informative. Usually they are aimed at grades 3-7. This one is no different with the exception of who the author is. All of the authors are different for each book. Joan Holub has written a few including this one.

I knew a little about the Salem Witch Trials but as usual with these books, I found out a little more. For example, I thought all of the "witches" were burned at the stake in Salem. Actually, they were not but hung, which doesn't make the atrocity any better but just different than I knew. I also did not know it wasn't until 2001...YES, 2001, that all the victims were vindicated. Amazing!

The book was extremely thorough in how the accusing began, how it spread, and how it eventually ended. Photos and drawings were included to support the information. All of it was interesting and somewhat of an eye opener. I would caution to have conversations especially with younger children about some topics that may be frightening.

Terrific book and gets 5 pumpkins!

I received a copy of this book from the author. The reviews here are 100% my own and may differ from yours. ~Michelle

This is great, and you are right somehow I always learn a little something new.