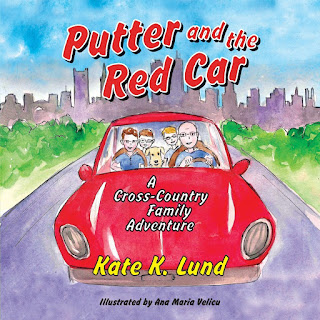 Summary:
Putter and the Red Car is the story of one family’s cross country road trip narrated by a lively Airedale terrier. The book incorporates ideas related to family, change, geography and adventure with a backdrop of bright colorful illustrations.

My review:
This is a cute book told from the perspective of a dog. That is a different idea to write a book on what could be bogged down. Kids would like the idea too especially if they like dogs.

The only thing I had issue with was the dog apparently pushing the button for the elevator. This would be very unlikely. I think I would have liked to have seen the dog interacting with his family more too.

If I could make any suggestion for the book, it was lacking a small glossary. There were a couple of words that would have needed to be defined or at very least explained. Since this book is targeted for 6-9 year olds, that would be something that needed to happen. I personally would have liked to have known what an Airedale terrier is verses some other kind of terrier.

As for the illustrations, I like that the book was done in bright watercolors. This certainly added to the book. However, I felt the illustrator needed to take more time as she left many white spots throughout the entire book.

Overall, not a bad little book so, I give it 4 stars.

Disclosure: I received this book for my open and honest review. The reviews expressed here are 100% my own and may differ from yours. ~Naila Moon
Where to find the author: 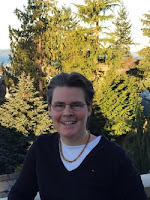 Hello! Welcome to the February 2016  Kid Lit Blog Hop. This exciting, now monthly hop,  is where we develop an engaged group of people who love everything that has to do with children's literature. Everyone is welcome to join us: bloggers, authors, publicist, and publishers!

Simply make a post and add it to the linky. (Please make sure to add your direct post only) If you are an author, feel free just to link to your blog.

Once you are done, then hop around to visit others. Please follow the co-host and visit at least the two people above your link. Please leave a comment when you do visit, we all like those.
Also, it would be appreciated if you grab the Kid Lit Blog Hop Badge and display it on your blog and/or your post.

Our next hop will be March 16, 2016. The hostess will be around to see you. Happy Hopping!

Disclosure: I am spotlighting this book on behalf of the author and Bewitching Tours. I have received no compensation for this post and not responsible for the giveaway below.

Astronauts, Aliens, and Apaches? What could possibly go wrong?
Working for a billionaire space entrepreneur has its perks:  a nice paycheck, free room and board, and all the space flight hours a guy could want. But everything has a price.  Astronaut Noah Wright has survived an alien attack, time travel and a wormhole, but the Apache princess he brought back through time may be the death of him.

Ela, only daughter of Chief Itza-Chu of the Mescalero Apaches, finds herself out of place and out of time. Everything she knows of her early 1800’s life has vanished. Her savior and protector, Noah, is kind, but he’s not her family and certainly not Apache. Her only wish is to get home, but returning through the wormhole that brought her to the future threatens more than her past, causing her to have to rediscover what home really is.

Excerpt 1
Chapter One
SpaceXport Base Antigravity Bay, New Mexico – the near future
“Use the grab bars, Carlton. You’ll never make it to the cargo bay without using the grab bars,” Noah Wright instructed through the intercom to a struggling member of his astronaut training class.
These folks were engineers and scientists, yet the very basic, common sense tasks were somehow the most difficult for them to grasp.
“Stop spinning, Ramirez. What are you? A trapeze performer?” Noah turned the dial on the antigravity control panel. “Prepare for gravity. That’s it for today.”
The class of five settled ungracefully to the ground.
Rookies.
This team tested what remained of his patience. The only saving grace was the first crew was already working on the hotel pod construction. This group? These guys wouldn’t have lasted two months in the NASA program. Noah pinched the bridge of his nose, willing the headache pounding behind his eyes to go away.
Not my circus. Not my monkeys.
Except they were.
The door behind him opened, and Noah closed his eyes tighter, not turning. “Captain? You have a call from sick bay. It’s Ela,” the intern said.
Of course it’s Ela.
Ever since they’d returned through the wormhole with the Apache princess, his literal and metaphorical headaches had begun. Technically, she wasn’t his responsibility. His morality insisted otherwise. He’d been at her bedside for weeks after their return, nursing her back to health. She had begun to recover quickly from a severe case of measles after the first round of vaccines. Considering the shape she’d been in when they’d arrived home, she wouldn’t have made it another week in her time. Hell, she wouldn’t have made it in his time, forty years ago. They even had a vaccine for cancer now. Medicine had come a long way. Physically, she’d recovered. But mentally? Emotionally?
Apparently being dragged more than two hundred fifty years into the future from her 1800s New Mexico home and tribe was going to take longer to adjust to.
Hell, he got it. He did. When they’d landed in the desert and into the past, he’d been overwhelmed and confused. He was currently one of three people on Earth who understood her predicament, but that didn’t make her any more cooperative.
You could take the princess away from the Apaches, but you couldn’t take the Apache out of the princess.
“Captain?” the intern repeated.
“I heard you. I’ll be there in a minute.” The door clicked closed behind him, and Noah took a deep breath. He waited for the training class to clear the hallway before he made his way out. Conversation was the last thing he wanted at the moment. Well, maybe second to the last. Making the long trek to the sick bay for an earful of Apache was currently topping that list.
So far she’d lived up to his every expectation of the title of princess.
Curt. Rude. Demanding.
And 90 percent of the time, he didn’t understand a word she said.
Noah wound his way through the complex, past the construction bay where his transport shuttle was currently being filled with supplies and construction equipment. The ground crew walked with clipboards, doing their final flight checks of the supply-laden transport. Cole and Tessa were already aboard the first of the launched hotel pods, now anchored to and floating near the Moon, readying it for his arrival.
Their employer and benefactor, Duncan Janson, had carried on without them the six months they’d been assumed lost in space after their asteroid mining debacle. And when they’d returned with an alien ship shelled with platinum and a fuel hopper full of asteroid samples? The boon had provided the financial boost Janson needed to launch the next phase of his plan for space tourism.
“Captain,” a voice called from behind him.
Noah spun around abruptly. “What now?” he bit out.
The look on the intern’s face tweaked at Noah’s conscience, but he didn’t apologize. The kid was on his last nerve.
“Never mind. I’ll take care of it.” The intern slunk away, avoiding further eye contact.
Good plan.
The overhead page requesting his presence in the sick bay nearly pushed him over the edge. For a second, he considered walking out of the building, getting into the Bombardier, and driving across the desert until the blasted thing stopped.
Instead, he lowered his head and pounded across the campus to the sick bay.
To his Apache princess.

Lisa has always enjoyed reading about monsters in love and now she writes about them, because monsters need love too.

She adores beasties of all sorts, fictional as well as real, and has a farm full of them in her Southwest Missouri home, including: one child, one husband, two dogs, two cats, a dozen hens, thousands of Italian bees, and a guinea pig.

She may or may not keep a complete zombie apocalypse bug-out bag in her trunk at all times, including a machete. Just. In. Case. 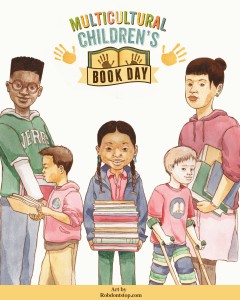 I just wanted to share with all of my readers. This is the link to all of the great books that were shared for the Multicultural Children's Book Day event that was held Jan. 27th.

Please check them out. Read diverse books and get them in the hands of children. ~Naila Moon 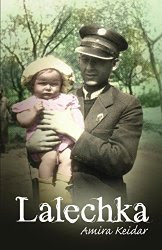 This is the real story of one Jewish family confronted by the terror of Nazi rule. The book follows Lalechka, the little girl born into the chaos of war and holocaust and forced to struggle with the reversals of fortune that led her each time into foreign and terrifying regions. But, beyond that, it is the story of the true friendship of three girls in early 20th Century Poland, a friendship that won’t cower before government dictates. An astonishing manifestation of loyalty and courage.
This is Amira Keidar’s first novel, based on the journal written by the young mother during the annihilation of the ghetto, as well as on interviews with key figures in the story, rare documents and authentic letters.
My review:
I was absolutely floored by this book. I have read several books about the Holocaust and the atrocities that occurred in those years. This one though was like none other I had read. It was told in first person and each chapter featured a different person. It centered around a young girl who was born in the worst circumstances imaginable. It was a story of unconditional love but more so, absolute friendship.

As I read the gamut of emotions swelled over me in an unusual fashion. I shed a tear, I was angry, I was disgusted, I was relieved. I hurt for this child who had gone through so much, had lost so much,just to stay alive. The people who loved her did what they could, even from the beginning when her Mother had to let go. She was loved.

Is this just another Holocaust story from the historical times? No, this is a true story, a story that had to be told. This is a story that has to be heard like the stories of other survivors. It needs to be told again, and again, so that what happened to this child and her family and the many other families NEVER happens again!

Side note: This book goes from before she was born up through present day. You find out what happens to her near the end and you get to see photos too. Hint, the cover photo is her, read this book to find out who the other person is.

Disclosure: I received a Kindle copy of this book in exchange for my open and honest opinion. The views expressed here are 100% my own and may differ from yours. ~Naila Moon 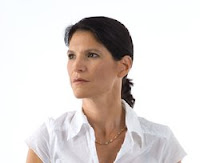