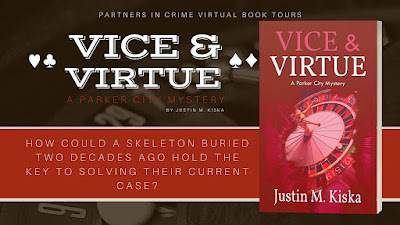 Three years after the Spring Strangler case rocked the historic Western Maryland city nestled at the foot of the beautiful Blue Ridge Mountains, life has returned to normal for Detective Ben Winters and his partner, Tommy Mason. With a new chief now leading the department and the city slowly crawling out of its economic distress, everything seems to be moving in the right direction.

Until one sweltering summer day, a killer begins targeting police officers. Ben and Tommy find themselves once again leading an investigation the likes of which Parker City has never seen. The detectives quickly come to realize that until the shooter is found, everyone wearing a badge is in danger. To complicate matters even further, when a recently unearthed skeleton mysteriously connects to the string of police homicides, Ben and Tommy begin to think their current case may be tied to events twenty years earlier.

But how could a skeleton buried two decades ago hold the key to solving their current case?

I did not realize I was reading a second book in a series when I started reading this book. Fortunately, the author gave a brief scenario and understanding of who the main characters were. The book, as the subsequent book, lays out a case of two detectives in the fictional town of Parker.

The book starts in the mid 1980's with a prologue that sets up the book and the first mystery/murder. The first chapter begins with the late 1950's and switches back and forth from there. Shady characters are revealed slowly throughout the book and how they tie in with each other. I use the term "slowly" loosely because in this case, it is the best place for it to be. The characters are built in such a way that I could not help but want to turn the pages as I read.

I loved the mysteries that unfolded in this book and felt the author did such a good job putting it together. He never lost sight of any of his characters and was able to capture what happened with each one.

The only two things I can say that did bug me was this:

The author repeated himself a couple of time by referring to the previous books case and how that effected the detectives' job and psyche. I think that could have been left out.

I was able to figure out who the killer was about 5-6 chapters before it ended. Or at least the connection to the murders. There is a twist and that was good but even that was figured out.

Overall, I liked this book, and it is a good page turner that kept me wanting to read. 4 stars!

Disclosure: I received this book from the author. The review here is 100% my own opinions and may differ from yours. ~Michelle

When not sitting in his library devising new and clever ways to kill people (for his mysteries), Justin can usually be found at The Way Off Broadway Dinner Theatre, outside of Washington, DC, where he is one of the owners and producers. In addition to writing the Parker City Mysteries Series, he is also the mastermind behind Marquee Mysteries, a series of interactive mystery events he has been writing and producing for over fifteen years. Justin and his wife, Jessica, live along Lake Linganore outside of Frederick, Maryland.

Thanks so much for your good and honest review! Sounds like a good read!

Thanks, Michelle. I'm glad you liked VICE & VIRTUE. And thanks for being a part of the book's release tour!