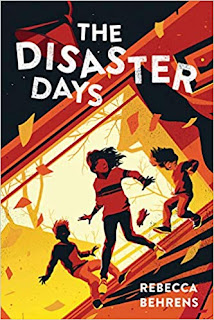 
Hannah Steele loves living on Pelling, a tiny island near Seattle. It's a little disconnected from the outside world, but she's always felt completely safe there.
Which is why when she's asked one day to babysit after school, she thinks it's no big deal. Zoe and Oscar are her next-door neighbors, and Hannah just took a babysitting class that she's pretty sure makes her an expert. She isn't even worried that she left her inhaler at home.
Then the shaking begins.
The terrifying earthquake only lasts four minutes but it changes everything, damaging the house, knocking out the power, and making cell service nonexistent. Even worse, the ferry and the bridge connecting the kids to help―and their parents―are both blocked. Which means they're stranded and alone... With Hannah in charge, as things go from bad to dangerous.

As I generally do not read a preview for a book, I had no idea that the disaster would be an epic earthquake. The title of the book only alluded to the fact that it would be several days and there would be some kind of disaster the characters would have to deal with. I feel that the book cover was a good draw for the inside.

The main characters are three children stuck in this massive earthquake alone. With only the skills of some scouting, memories, and a babysitting class, the main character, Hannah, helps all of them survive. It was truly over the top of what she had to deal with. In fact, rather unrealistic for the age she is supposed to be. However, it also made for good writing that I think middle school kids would probably love.

I was enraptured enough by this book that I kept getting feelings of sorrow with each thing that happened to them. I wanted to reach into the book and, if nothing else, grab hold of them and let them know it was going to be okay. By the end, I was not even sure if they were to ever have help.

Overall, this was a pretty decent book. The only thing I would have liked to see is maybe some resources and numbers in the back of the book that middle grade children could use. This book proves that you can never be prepared enough no matter what your age.

I give this book 4 stars.

Disclosure: I received a copy of this book from the author. The review and opinions here  are 100% my own and may differ with yours. ~Michelle aka Naila Moon 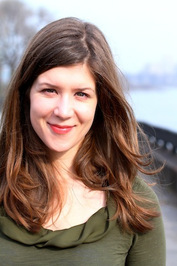 Rebecca Behrens is the author of three critically acclaimed middle-grade novels that explore famous historical figures and fascinating places: WHEN AUDREY MET ALICE, SUMMER OF LOST AND FOUND, and THE LAST GRAND ADVENTURE. Her next release, THE DISASTER DAYS (10/1/2019), is a thrillingly realistic survival story. Rebecca grew up in Wisconsin, studied in Chicago, and now lives with her husband in New York City.
at September 04, 2019

View this group on Goodreads »